Spain’s Profand Fishing Holding has moved to acquire Spanish retail group Mercadona’s processing firm Caladero, after buying Stavis Seafoods and investing in Seafreeze in the US.

Zaragoza, Spain-based Caladero will add a new range of species Profand’s portfolio. Caladero processes salmon, trout, seabream and seabass, as well as sardines, in addition to octopus, squid and shrimp Profand is known for.

Vigo, Spain-based Profand agreed to buy 100% of Caladero, which specializes in products in modified atmosphere packaging MAP) trays for Mercadona, which took control of the plant in 2010 after it ran into difficulties under Carlos Amoros, its former owner. The plan at the time was to eventually find an industry buyer such as Profand, which is the main supplier of cephalopods to the retailer.

The deal, which is pending approval by the Spanish competition authority, will allow Profand to “boost its growth and consolidate its leadership in Spain in both volume and efficiency and productivity”, the company said.

The MAP-focused Caladero plant in Zaragoza has 55,000 square meters of production area with a capacity total of 21,000 metric tons of product per year, employing some 600 staff.

Caladero will add €200 million ($222.50m) and a net profit of €3.4m to Profand’s growing business. When Undercurrent News revealed Profand’s move for Seafreeze, done in partnership with Michael Tourkistas, the founder of US shellfish processor East Coast Seafood Group, it emerged the deal would take the company past $500m. So, the addition of Caladero will make the wider Profand group to around $720m in annual sales.

“This is a strategically important transaction both for Profand and for the Spanish seafood industry as a whole. The sector was deeply affected by the 2008/09 financial crisis and this transaction is recognition of the fabulous recovery the sector experienced,” Ignacio Kleiman, founding partner of Antarctica Advisors, told Undercurrent News.

“It also shows that Profand is one of the “doers” of the sector, as they are rapidly becoming a true global player. This acquisition of Caladero solidifies their position in Spain and as a strategic supplier to Mercadona while their acquisition over the last two years of Boston-based Stavis and Rhode Island’s fishing company Seafreeze, sets the stage for their US expansion,” said Kleiman, who sold both Stavis and Seafreeze to Profand. He clarified he did not work directly on this deal, however.

“I think this will entice other Spanish players to consolidate their presence regionally and throughout Europe, and to search for growth overseas,” Kleiman told Undercurrent.

“The integration of Caladero allows us to be world leaders in the manufacture of seafood with high added value, such as fresh fish and ready-to-eat products,” said Enrique Garcia, owner of the Profand.

“Together, we have transformed Caladero into a sustainable and innovative company that now becomes part of a great business project such as the Profand,” said Juan Larraz, general director of Caladero.

The plan to move further into processing in Spain with Caladero comes after an audacious upstream deal in the US, when Profand teamed with Tourkistas on buying Seafreeze.

Having moved into the US last year with a deal for Boston, Massachusetts-based processor Stavis, Profand’s IMV Holding subsidiary closed a deal for Rhode Island’s Seafreeze from the Goodwin family in May, as first reported by Undercurrent. Tourkistas confirmed the deal, which is a personal one and does not involve East Coast.

Undercurrent reported in December last year Profand was in talks to acquire Seafreeze, which operates trawlers Relentless and Persistence, which can freeze about 10t of squid and fish every day. The deal adds US squid fishing capacity to the fast-growing Spanish group, which already bills itself as the world’s largest player in cephalopods, with fishing and/or processing assets in Argentina, Peru, Senegal, India and Morocco.

Last December, when Undercurrent first revealed the deal was in the works, it wasn’t clear how Profand planned to structure the takeover in light of the fact foreigners can only own 25% of US fishing vessels. 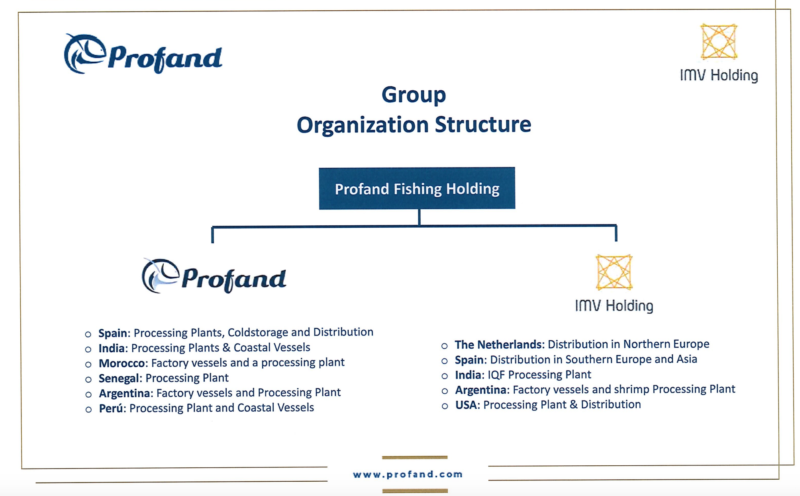 Profand has over 2,000 employees and expects to harvest more than 80,000t of seafood in 2019, with its biggest species group being cephalopods such as squid and octopus.

The document also breaks down the structure of the group. The ultimate patent is Profand Fishing Holding, which then owns two operating companies. 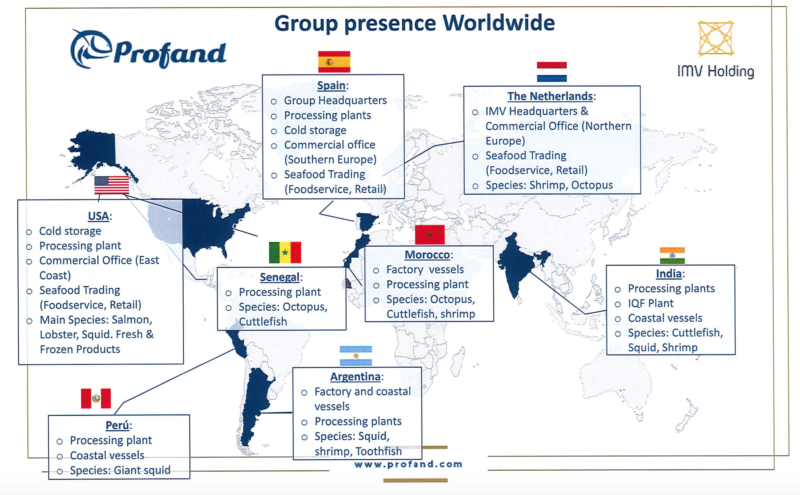 These are IMV and Profand. IMV controls Stavis, distribution in northern and southern Europe, factory vessels and a shrimp processing plant in Argentina, and an individually quick frozen, or IQF, factory in India. Profand owns the processing plants, coldstorage and distribution in Spain, plants and vessels and/or plants in India, Morocco, Senegal, Argentina and Peru.